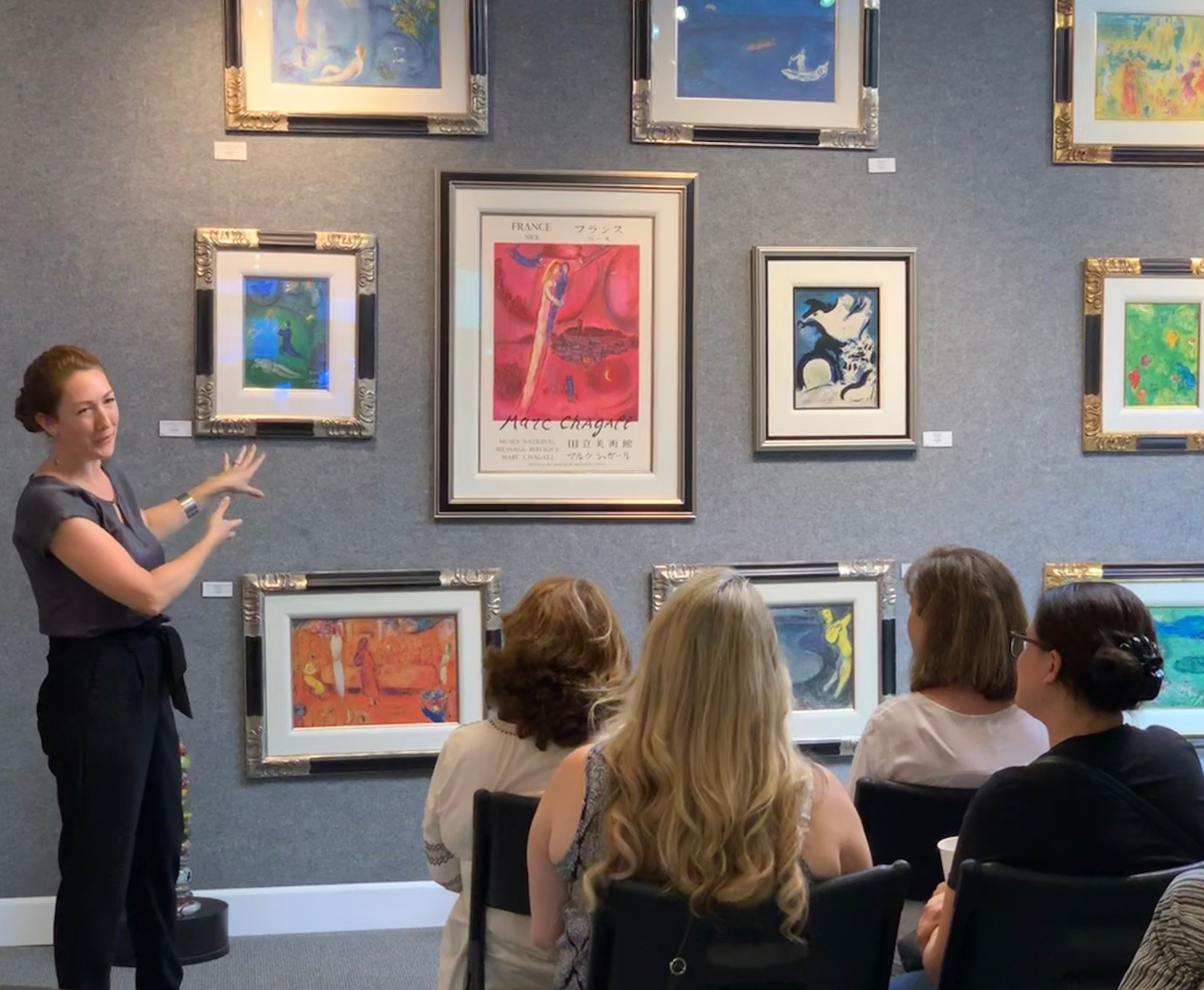 Posted at 11:20h in Uncategorized by artcoronado 0 Comments
0 Likes
Share

Trisha Zetterberg, owner of Art and Frames, recently hosted a presentation on “the most romantic and well-loved artist of the 20th century,” Marc Chagall. The Meaning and Metaphor topic examined the framed original, signed lithographs of some of his works, notably illustrations of the Greek tragedy, “Daphne and Chloe” displayed in her gallery. Many of the lithographs were purchased by the previous owner at auctions, when Chagall’s family was forced to sell his works to pay his taxes upon his death.

Recognizing the metaphors in his works established more appreciation for his genius. In addition to enjoying the beauty of the paintings, the audience, especially those not familiar with Chagall, were able to add depth to their knowledge of his works through familiarity or his themes and symbols.

Andre Breton, an influential French writer and artist, said, “[With Chagall] The metaphor made its triumphant entry into modern painting.” Zetterberg described the symbolism imbedded in his work as she pointed out the various figures and objects. The sun and moon represented the universe and the “cyclical movement of life in one piece.” A city in many pieces was, also, a representation of the universe. Fish symbolized food for life; the goat, lust; flowers, beauty. Birds could be either lust or love. She said, “He always interjected his meaning and metaphor in his work.”

Appearing frequently as major subjects were his first wife Bella, always the beautiful woman, and their daughter Ida whom he called Little Donkey. Sometimes subtly inserted but often prominent, the donkey figure allowed him to express his deep love for his daughter in his paintings. Searching for the donkey in one painting, Zetterberg pointed out a small outline of only the donkey’s head tucked in the bushes. Family and love were major themes in his works.

Chagall’s paintings were dominated by the color blue. Its coolness appealed to him and lent itself to his paintings’ dream-like quality. In mixing his colors, he created a blue that took his name, Chagall Blue.

Born in Belarus in 1887 in a small Hassidic community, he began formal art lessons at ten years-old and continued instruction in various schools, honing his particular style. Although Russian by birth, he is considered a French artist because of his extended residence in France and his move away from the popularity or realism prevalent in Russia. Throughout his long, prolific life. “He retained his child-like quality. Rules never made an impact on him.” His paintings have a dream-like quality, with figures floating through the air. He intentionally left his figures footless, emphasizing their lightness.

His Jewish heritage surfaced in his illustrations and cover for a Hebrew Bible and his stained glass window depicting the twelve tribes of Israel for a synagogue in Jerusalem. In-spite-of having to relocate when both World War I and World War II started and depicting some of the horrors of war, his optimism and religious faith remained strong. Once he said, ”Life is like a street. It has a shady side and a sunny side. I choose to walk on the sunny side.”

His unique style featured the people, places, and images that he treasured. Zetterberg stressed that Chagall, inspired by his family, wanted to ”inspire his viewers with his continued lightness of hope, faith, beauty, and love. Even in war, he wanted people to focus on love.”

Chagall found asylum in the U.S. during World War II, where he was surprised to discover he was already well known. He found work in set and costume design, having gained experience previously in Russia where he had created set and costumes at the Moscow State Yiddish Theater. After the war, he returned to France.

His works in a 1914 exhibit in Germany were burned as “degenerate art,” but his art is displayed in numerous places. The Chagall Museum in Nice, France, is devoted to his works. Controversy surrounded his commission to paint the ceiling of the Opera House in Paris because of its classical style. ”The strict classical elite did not want him;” however, the ceiling which honors famous musicians, is now the major draw to the Opera House. Stained glass windows in Mainz, Germany, and Metz, France, as well as the U.N. building in New York City survive.

Chagall died at 97 years old, leaving a vast amount of work, including his autobiography “My Life,” for later generations to appreciate and analyze. Studying his paintings, sets, costumes, and stained glass creations allows the audience to feel as if they know the man. His emotions are on display for all to see.